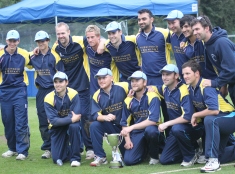 Following their triumph last week in winning the SNCL championship, this weekend go-ahead Edinburgh club Carlton added the Murgitroyd National  T20 to this year's silverware collection.  ﻿﻿﻿﻿﻿﻿
Behind the scenes the tension was unbearable - would the club's finance committee approve the essential trebling of the Dura Glit budget in time?  All the stops were pulled out and the committee delivered.  Amid talk of a lucrative sponsorship deal, supplies of the polish will start rolling in on Monday.  By comparison,  things on the field were simple as Carlton ran out convincing winners in both the semi-final against Dumfries CC and the final against Clydesdale CC.

The finals were held at Poloc CC which is in a leafy part of Little Philadelphia, as Glasgow insists on styling itself following the visit of Brad Pitt and Angelina Jolie recently.  For some unaccountable reason, Brangelina were not present to witness Carlton's victory.  Their loss.

Fantasy Bob was there to share in his club's Manchester United moments and very pleasing it all was too to bask in the reflected glory.  News of the victory travelled fast along the M8 to Carlton's Edinburgh home and the joy in the capital's streets was unconfined as thousands of people thronged Princes Street in celebration.  They were entertained by a huge fireworks display the Council hastily organised to honour the team's achievement. As the players and supporters arrived back at their Grange Loan HQ, Edinburgh Castle and the sky above it were spectacularly lit up in a manner usually associated with Hogmany or the closing of the Edinburgh Festival.  It was a modest but fitting tribute to the club's triumphant season.