The pundits of the press are convinced that 2016 has been the Grim Reaper’s most successful year ever as celebrity after celebrity has been taken from our midst.

The cricketer must look soberly at these claims – 2016 may have been cruel but the Grim Reaper’s stats were better in 2015 as far as removing test cricketers from the crease of life.  He bagged 15 in that year.  It would after all be hard to top the year which seized Richie Benaud, Tom Graveney and Clive Rice. But in 2016 the Reaper had a good go – and strangely enough he dismissed exactly 11 cricketers who played at Test Level.  It is time to celebrate them.

Not a bad side with a couple of true greats:

John Gleeson dismissed 8 October 2016 – Australian mystery spinner of the late1960s bowled leggies with an off spin grip 29 Tests 93 wickets at 36.20

Max Walker dismissed 28 September 2016 – Australian swing bowler of the 1970s - his unconventional bowling action – “right-arm over left earhole, legs crossed at the point of delivery” – earned him the nickname “Tangles” or “Tanglefoot” 34 Tests 138 wickets at 27.47.

Len Maddocks dismissed 27 August 2016 - Australian wicket keeper who will always be remembered as the man Jim Laker trapped leg-before to complete his famous ten-for at Old Trafford in 1956, 7 Tests 19 dismissals.

Ken Higgs dismissed 7 September 2016 – fondly remembered for one of the biggest bottoms in cricket - so great a bowler for England that he has previously featured in Fantasy Bob’s blog  – 15 Tests – 71 wickets at 20.74

Donald Carr dismissed 12 June 2016 – more noted as Secretary of the MCC during the D’Oliviera controversy – a school boy wunderkind who played only 2 Tests, skippering on one occasion, but skippered Derbyshire with distinction.

J J Warr dismissed 9 May 2016 – played only 2 Tests in the 1950-51 tour of Australia and sadly retains the worst of any England Test player at 1-281.  He went on to skipper Middlesex and be President of the MCC.

Rangy Nanan dismissed 23 March 2016 - an off spinner from Trinidad at a time when W Indies were committed to a pace only attack he played only one Test taking 4 wickets.

Andy Ganteaume dismissed 17 February 2016 – the man with the Test batting average of 112.  He had one Test innings – but couldn’t force his way into the W Indies batting line up of the time dominated the 3 Ws.  Timing is everything they say – he may have had it in the middle but not elsewhere.

Ghost of Christmas Past 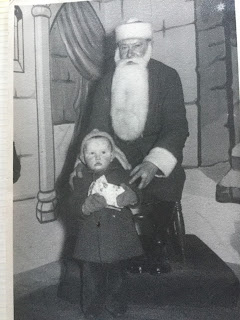 There are those in the go ahead Edinburgh cricket club Carlton who refuse to believe that Fantasy Bob was every young.

But here is a picture which confounds their scepticism.  It is of young FB - he is the one at the front, by the way - at an important meeting in his early childhood.

Readers might wonder why there is not a look of enchanted and excited wonder on the young FB's features.

For he had entered Santa's Grotto in one of Aberdeen's more prestigious stores with an appropriate level of excitement and had sat on Santa's knee with that excitement still high.

'Have you been a good boy all year,'  Santa asked.

'And do you know what you want from Santa?'

'Dinna be daft, loon - it hisnae been invinted yet fitiver it is.'  Santa's accent slipped nearer the Aberdonian belying his claim to be from the frozen north. 'Ony thing else?'

'A guide to how to play leg spin bowling.....' said FB on the verge of tears.

'Nae chance - it'd be wasted on you onywye.  Hae a couple o' tin sodjers playing bagpipes...an' mak sure an' smile for the phottie.'

Is the look on FB' face of a dream broken - an illusion shattered?  Even at that young age the threat of leg spin bowling hung heavy over him.

His scepticism about the claims made on Santa's behalf may have begun on that day.  These deepened shortly afterwards when an older child told him  'Santa - he's really your Dad.'  FB looked wide eyed at this world shattering revelation.  He failed to comprehend it.  He should be proud of course but how could his Dad get round all the children in the world?  He only had an Austin 7.