Fantasy Bob returned from his recent Italian sojourn with an ear infection.  Not only was this uncomfortable but it reduced his hearing significantly.

He strained to hear the sweet nothings that Mrs FB is wont to whisper into his ears.  No more came her seductive call, 'Must you always leave your cricket bag exactly where I am going to trip over it?'

He felt isolated and alone, a latter day Beethoven, only without the symphonies.

He struggled on, and for the most part managed to cope with vigorous nodding and inane grinning. Many of his friends and colleagues did not notice the difference.

But it was on the cricket field that he faced a significant ethical dilemma - was it appropriate that he should take his usual turn umpiring in recent matches of his Carlton All Star 4th XI?   For the umpire's sense of hearing is important.

Wrapped in anxiety FB spent sleepless nights examining the issues.  He found a solution which reduced the moral hazard.   He might just be able to discern an appeal, but even so he took the precaution of loudly uttering after every ball 'Not Out' - an outcome which increasingly mystified the opposition as they watched the ball speed along the ground to the boundary.   His call 'Wide Ball - Not Out' seemed to maximise their confusion.  The skipper took matters into his own hands.  At the end of the over he approached FB and appeared to ask him something with an animated gesture.  FB's response was sound.  He nodded vigorously and gave an inane grin.  That sorted things.

Readers will no doubt admire the elegance of FB's solution to his difficulty and suggest that this does not address the more significant hazard.  How could the Beethovenian FB detect any snick behind. FB puts his hand up (not his finger) - there was no way he could.  It is as well that FB's team mates are morally pure as the driven snow and ascribe to sporting values of the highest order. They will always walk when they nick it.  FB therefore felt confident that he was in the ethical clear.

However his problem got him thinking that cricket umpiring does present the highest demands on the official's senses.  Although rugby or football referees have to run madly from one end of the pitch to the other while retaining enough puff to blow the whistle, the acuity of their sight and vision is not subject to similarly severe examination.  Large rugby players colliding are usually fairly visible and the collision can be heard several streets away.

But the cricket umpire has to detect the slightest deviation in flight as the ball passes the bat or the faintest snick.  It is a superhuman challenge.  In the typical lower league cricket environment the umpire's auditory test has also to contend with a cacophonous symphony of background noises - bongo drummers, the sound systems of frolicking barbecuers, screaming children abandoned by their parents, barking dogs abandoned by the screaming children, squealing tyres from emergency stops caused by the barking dogs, shrieking brakes and blaring horns from traffic backed up, the excited chorus of road rage, accelerating motor bikes, decelerating motorbikes.  No wonder Beethoven declined the opportunity to be a cricket umpire.

But FB is pleased to say that his infection has cleared.  Not only that but he has had his ears irrigated removing lumps of wax the approximate size of a cricket ball.  He now faces another ethical dilemma - is his newly restored super acute hearing fair to his team mates.  Surely there is a risk that he will now hear snicks from matches several miles away and reach a wrong decision.  He is overcome with anxiety - should he stand or not?
Posted by fantasy bob at 09:57 2 comments:

Fantasy Bob's  engagement with political action has for the most part been confined to his long running campaign to secure support from the parties for legislation to outlaw leg spin bowling in lower league cricket.  For reasons which are lost to him, no party has seen fit to adopt this policy and reel in the thousands of votes it would attract. 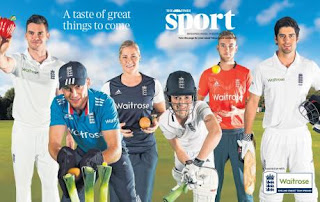 However a recent experience in Waitrose has agitated FB's political muscle and he is considering overt action.  Now, cricketers may well think that Waitrose is a generally good thing - and the Waitrose in Morningside, close to FB's residence, an  enhancement of the area's general amenity.  For Waitrose is the current sponsor of the English cricket team who take the field with the name of the store emblazoned across their chests.  As he passes through the checkouts FB will feel a shadow of disappointment that his contributions to Waitrose's profits cannot be redirected to the support of Scottish cricket - which is significantly in greater need than the ECB.  He also steels himself to overlook the fact that his purchases may enhance Stuart Broad's salary.  But these are not the causes of his political anxiety.

Being under pressure of time FB sought out the constituents of the cricket tea he had to provide later in the day during a hasty visit to Waitrose in search of other comestibles.  He got the savoury.  He got some fruit.  something sweet was needed to top it off. It was then that FB was brought up short.  For search as he might in  the bakery aisle, the cake aisle, the biscuit aisle, even the foods from around the world aisle he could find no empire biscuits.

In this day and age, this is indefensible.  For a store overtly supporting cricket to fail to have available the fundamentally important constituent of the cricket tea is beyond comprehension.  It is barbaric. Something must be done.  Cricketers should take action.

FB notes that within a half mile radius of Waitrose there are at least 7 outlets which do stock empire biscuits.   He suggests that cricketing customers should let this guide their shopping habits.  This should bring Waitrose to its senses.

I don't want a pickle

Long suffering readers of these pages, being widely read, are familiar with the works of the Roman poet Catullus.  Not that they will find any cricketing references in his surviving work (perhaps he addressed cricketing subjects in verses that have not survived - we shall never know).

But the most famous quote from his work seems uncannily to have been inspired by Fantasy Bob.

'Ave atque vale,' the opposition wicket keeper will frequently mutter as FB pointlessly scratches his guard.  Hail and farewell - a simultaneous greeting and departure.  Catullus was evidently aware of the all too transitory nature of FB's visits to the crease.

FB was put in mind of Catullus during his recent Italian visit when he and Mrs FB spent some delightful days on the peninsula of Sirmione, a location celebrated by the poet.   Despite the overtly sexual content of much of Catullus' work, carefully selected verses were a set text when FB did Higher Latin.  Contrary to the belief of many of his junior team-mates in the Carlton All Star 4th XI, Latin was not still a living language when FB studied it although it may only recently have died.

Sirmione is a narrow peninsula on the southern end of Lake Garda and at its tip are the ruins of a Roman villa which is claimed to have belonged to Catullus' family, even though there is no match report which provides certain evidence that he was ever there. Whatever is the historical reality, FB and Mrs FB spent a pleasant morning poking around the ruins.  Catullus was the scion of a wealthy Veronese family and the villa, which is no modest 2 up 2 down holiday cottage, but spreads over 5 acres, would seem to suggest a certain level of wealth in its owners.   The atrium alone was the size of a decent cricket square.  Not that Catullus would have made much use of such a facility, his interest in cricket being negligible.

So if there was one thing that Catullus might not have expected in Sirmione it was a couple of thousand Harley Davidsons.  For that is what FB and Mrs FB encountered on their way into Sirmione - a couple of thousand Harley Davidsons.  Their visit coincided with the Sirmione Harley Party, a weekend gathering of Harley owners from all around Europe.  The throbbing roar of their grand parade on Saturday afternoon could be heard all around Lake Garda.  Get your motor running..............

FB looked hard but he did not spot any cricketers among the bikers.  There might have been a chance that MS Dhoni would be there - for the great Indian skipper has a collection of motor bikes and indeed owns a motorcycle racing team.  But Dhoni did not show.  Nor did Glen McGrath - reported as touring New Zealand on a Harley earlier this year.  FB struggled to convey his disappointment at these no shows to Mrs FB who appeared wholly unconcerned.

He found consolation for suddenly he found himself singing to himself his long forgotten but favourite motor cycling song.

Mrs FB's eyebrow rose.  She suggested that the sound of the Harleys was considerably more musical than FB's ululation.

But FB was undeterred.  This great lyric is so good it could have been written by Catullus - but it wasn't.   It is by Arlo Guthrie and FB fondly remembers hearing it many times in the late 1960s on the late night progressive music programme on AFN.  He should have been reading Wisden of course but at that time progressive rock had more attractions and seemed likely to change the world.

Hear the song on this link - with its splendid comic narrative about how the song was written and the exhortation to his audience to sing it with enthusiasm.  Mrs FB could not hold FB back.

Sadly, Arlo Guthrie never wrote any song about cricket.  This much he had in common with Catullus. 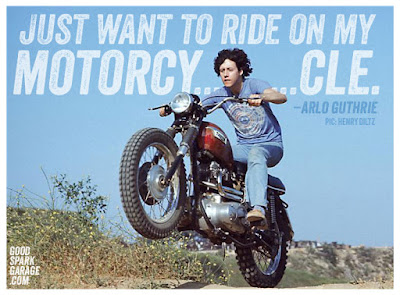