The Back Foot No Ball

For certain members of Fantasy Bob's household it is a cause for muted celebration  when he packs his kit up and stores it in its winter hide away.  After months of danger, Mrs FB can stroll around the premises free of the anxiety that he has deliberately left his bag lying in just where she is bound to trip over it.

However for Fantasy Bob the ending of another cricket season is a time of reflection on his achievements.  Not that that takes very long. This season his visits to the crease have been mercifully few.  In the fifteen matches he played, he marked his guard only three times.  He bowled in only eight.  He is mastering the skills required to be non-batting non-bowling skipper.  There is still the fielding to deal with - and it is not clear whether he has ever done any of that anyway.

This season Fantasy Bob contributed more runs to his team's cause as an umpire than as a batsman.

FB uses a scoring shot that other umpires ignore.

Law 21.5.1 is clear:  'the bowler’s back foot must land within and not touching the return crease appertaining to his/her stated mode of delivery.'

Any apprentice umpire can even find a picture of what this means. 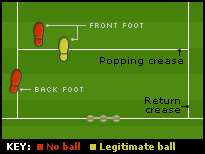 Many a bowler in the lower leagues will swing out in his delivery stride in an attempt to bowl from nearer mid-off than the stumps and will plant his back foot across or outside the return crease.  It only has to touch it to for FB's arm to go up and his clear baritone to sound out,  'No ball'.

This can lead to an interesting discussion as the bowler, not assiduous in his reading of Law 21 (or probably any other law to judge by the conversation that will ensue) will wheel round with a crazed look in his eye.  He will point to his front foot and suggest that it was well behind the popping crease.  FB will agree but say that the offending foot was the other.  It can come as a surprise to the bowler that he has two feet.  He will look down mystified.  But most bowlers accept FB's explanation.  However every now and then there is one who can't, who suggests that he is just making things up (they may point to his blog as evidence of his propensity for doing so) or that that he is conducting a personal conspiracy against him.  This all adds further to the entertainment of the afternoon.

Sometimes FB thinks he is the only umpire in the whole wide world of cricket world who applies this law.  TV highlights suggest that Test umpires seem to be unaware of it.  For example, the ball that Jadeja got Stokes with yesterday was bowled from very wide on the crease to say the least.  Replays at the fall of wickets examine the front foot but never the back foot.  Perhaps FB is just making it up...................