Fantasy Bob and Mrs FB are elsewhere for the next 10 days so new postings are unlikely until April.
Posted by fantasy bob at 23:43 No comments: 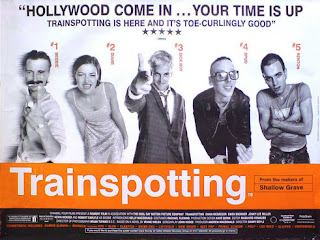 Fantasy Bob has noticed reports that Danny Boyle is going to revisit Trainspotting and make a sequel, or a prequel, or something.

While there is still controversy as to whether the film ended up a bit too much of a romantic celebration of hard drug users in Edinburgh, FB understands that the new film will take a different line.  It will above all correct the original's unaccountable decision to ignore the importance of cricket.

One of the most memorable scenes in Trainspotting was the opening monologue recited by Ewan McGregor over a sequence of him being chased through the centre of Edinburgh.  Test Match Quality.

But the new film promises even more.  FB has seen the script and, with apologies for the strong language that was also a feature of the original, shares it with his world wide readership here.  It seems to him to offer a better option than the focus heroin featured in the previous version.

Choose a bat. Choose a big f****** Gray Nicolls Scoop with thick f****** edges. Choose the front foot, choose the back foot. Choose that swing through the f****** line of the ball. Choose the ball smacking the boundary before the fielder f****** moves.  Choose the as-good-as-Viv-Richards-that-was moment.  Choose the inside edge onto the pad.  Chose the idiot umpire who doesn't see or hear it.  Choose the finger raised.  Choose a look of stunned f ****** disbelief. Choose the trudge back to the pavilion and slamming the  f****** dressing room door shut.

Choose a sandwich. Choose another. Choose a big f****** piece of chocolate cake with a cup of tea and a seat at last.

The cold snap that has brought snow to all cricket grounds across the British Isles may cause the majority of doughty groundsmen to retire to the tractor shed with a flask of hot tea and a copy of Grass Cutter's Monthly.

But at go ahead Edinburgh cricket club Carlton, things are different.

A new addition to the equipment means that the doughtiest of doughty groundsmen can continue his preparation of the wicket for the season's first match which is now only weeks away.


Carlton's planning committee have also announced that they will proceed with their long discussed plans to erect a ski lift on Grange Loan's legendary hill.

A spokesperson for the go ahead club said, 'The planning committee previously thought such an installation would be of limited use during the summer, but having seen how Fantasy Bob struggled to get up the hill last year, we are now sure that this is a wise investment.'

Captaincy - how easy is it?

Fantasy Bob has been moonlighting for CricketScotland's website again - here is a link to his latest piece on another issue he knows nothing about.
Posted by fantasy bob at 13:54 No comments:

Things are not well at go ahead Moscow cricket club Bolshoi CC.


Thanks to exceptional atmospheric conditions during the week, Fantasy Bob’s state of the art communications system, ie his telephone, intercepted the transmission from an eavesdropping device at the club’s Moscow HQ during a recent Committee meeting.


Hey guys.  The season is only weeks away and we are in big trouble.


Why?  Is doughty groundsman moaning about wicket being wetter than Swan Lake?


Skipper has been attacked and is blind.  No way he can do his grand jette this season.


What happen to bone headed skipper?


Da – he bowl me waist high beamer last year in nets - 100mph straight at crown jewels – he laugh and say it his nutcracker.


Da - that’s the man. Big pain in the giselles. He mad as Rasputin at having to bowl up the hill against the wind all season. He also mad that he bat number 11 every match. Think skipper has it in for him.  Have a couple too many vodkas one night, gets his tutus in right twist and decide to do something.


Give skipper a few short ones?


Worse than that.  He say he hire someone to sort him out.  Go on e-bay to get hitman to bowl him a few leg breaks.  Make him look like monkey in pas de deux.


Da, da skipper bloody hopeless against leg spin.  Gets his plié all in wrong place.


Big lump of horsemeat now say he say not what is wanted but hit man is no sugar plum fairy and gets going with the sulphuric acid.  So skipper need miracle surgery on eyes and not available this season.

As Scotland's cricketers do battle with Afghanistan in the UAE in a pair of matches which will go far to determine whether they compete in the 2015 World Cup - COME ON SCOTLAND - England's cricketers resume Test match duty in Dunedin.

Dunedin is nicknamed the Edinburgh of the South - its name is a rendering of Dùn Èideann, the Gaelic for Edinburgh, The city was founded in 1848 by the Lay Association of the Free Church of Scotland who had a mind to imitate Edinburgh's lay out and architecture which did not fit too easily into the topography. But many street names are derived from Edinburgh.

The cities entered a twinning relationship in 1973. One of the fruits of the twinning is a pair of reciprocal sculptures by Sylvia Stewart. The one in Edinburgh sits in Leith and is formed from a 2 tonne volcanic magma boulder, brought from the Water of Leith near Dunedin. In return Dunedin got 2 tonnes of Aberdeenshire granite but the City Fathers have struggled to find a place to site it. It is a local controversy of some proportion - not unlike Edinburgh's trams.

All this is of little interest to cricketers. What is of interest is that the Edinburgh of the south is the southernmost Test venue in the whole world. Four Test matches have been played at the University Oval. One, played in November 2009 was a classic. New Zealand beat Pakistan by 32 runs. Shane Bond took 8 for 153 in a match winning performance. Sadly it was his last Test - and only his 18th in total in a career interrupted by repeated injury. His 18 Tests produced 87 wickets at 22.09 and his 82 ODIs 147 wickets at 20.88, including 44 against Australia at a mere 15.79.

A great fast bowler - if he had been made of strong stuff like the Edinburgh-Dunedin sculptures he would have ranked with the greatest.

Fantasy Bob has read that 4000 videos of the Harlem Shake are being uploaded every day.

FB will gloss over any attempt to answer the question why.  Younger members of his worldwide readership will understand that this question is, like, irrelevant.  Like, you might as well ask 'Why the sky?'  Some things are like just meant to be.  Like whatever.

The 30 second videos all take the same form.  A lone dancer person starts moving sometimes in time to the soundtrack song, sometimes in what appears to be nothing other than a weird parody of Fantasy Bob's bowling action.  People all around ignore this poor soul.  Then halfway through they all join in but dressed in strange costumes.  As said above, if you have to ask why, then, like, whatever.

But go ahead Edinburgh cricket club is nothing if not down with the kids - indeed many evenings during the season it is covered with them.  And their I-Pods.

So a version of the Harlem Shake at the world famous Grange Loan headquarters is in order.

The planning committee sprang into action.

Here is a still from the first part of the video.  The world famous doughty groundsman strutting his stuff.  Inspiring.

In fact so inspired was the planning committee at getting this far that they forgot about the next bit and failed to get the squad in fancy dress (also known as T20 kit) to fill in on the second part of the video.

(For the real thing - here is a link to the Norwegian Army's version).