As steep as it gets

The cricket season has not yet got underway.  But even as Fantasy Bob anticipates the series of 50s and 5-fers that will mark his season, he is confident that his main sporting achievement of 2016 is already in the bag.  (And before his handful of long suffering readers suggest as much, he should mention that he has not taken part in any empire biscuit eating marathons in the close season).

Not that an empire biscuit would have been unwelcome on that sun lit morning during his recent visit to the Austrian Alps.

As the sun rose into the azure above the mountains, FB's ski group ascended in the cable car.  A gentle ski down to a button lift was a nice warm up, but as his group came off that lift they were unprepared for where the instructor was leading them.  A couple of turns later they stopped with a collective gulp.

What they were looking down is reputedly the steepest secured slope in Europe.  The Langer Zug run at Lech.   There are several ways of measuring steepness - it is 142%, it is 55 degrees on one method, 78 degrees on another.  Whatever.  This was steep - looking over it was like standing on a diving board.

For cricketers who find it hard to envisage such topography, any of these measures mean is considerably steeper than the world famous outfield hill at the Grange Loan home of FB's beloved Carlton CC, a treacherous black run on which FB has come to grief on many occasions.

But before FB could draw this telling comparison to the attention of his colleagues, they were off.  FB told himself to rely on his technique.  Now, those who have seen FB rely on what he imagines is technique when facing leg spin bowling - or indeed any other kind of bowling - might fear that this was an unwise tactic.
But as FB leaned forward and down, forcing his weight onto his downhill ski, the edge gripped.  After 2 turns the thrill kicked in.  This was something.  Speed skier Harry Egger clocked 248 km/hour (154 miles/hour) down the Langer Zug, at the time the world record.   It would be an exaggeration to say that FB flowed down the slope in that fashion.  FB acknowledges that his own speed was slightly less brisk, barely above military medium in fact, but for several splendid minutes he felt master of the mountain.

This was the thrill of the hat trick ball clattering into middle; or the joy of the six into the upper tier at long off.  Better even.  Better even than an empire biscuit.

Most ski slopes look much less steep from the bottom.  Not the Langer Zug.  Not to FB.  Looking back as the adrenalin rush faded, FB was sure that even from the bottom it was still considerably steeper than the hill at Grange Loan.

Here is a video of a slightly better skier than FB going down.
Posted by fantasy bob at 20:10 2 comments: 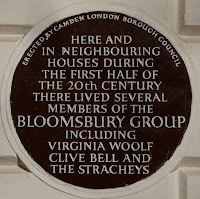 Fantasy Bob was on assignment to London this week.  Bloomsbury to be exact.  As he walked between office and hotel he passed numerous blue plaques marking the former residences of the famous and infamous.  And Bloomsbury has more than its fair share of these plaques, for in the first half of the 20th Century it was home to the Bloomsbury Group, long revered as an influential group of like-minded writers, intellectuals, philosophers and artists noted for many great achievements including a spectacular propensity for bed-hopping with each other.

Among the more eminent were E M Forster, John Maynard Keynes and Virginia Woolf.  FB's long suffering readers will be thinking to themselves - this is just the point when FB points out that this Group is overrated because there is no cricketer among them.  He will say that he has scrutinised at length the works of JM Keynes and while he may well have been right about the consequences of the Treaty of Versailles, he presents nothing to guide the faltering batter's attempts to deal with leg-spin bowling.

FB is disappointed that his handful of followers think he is so predictable, for the Bloomsbury set did contain a cricketer of real potential as these charming photographs confirm..

These photographs confirm to FB his longstanding belief that the problem for Virginia Woolf was that she did not know whether she was a batter or a wicket keeper.  'Who's Afraid of Virginia Woolf?, the old cliche runs, which suggests that she might have been a leg spinner too.  No wonder she was a tortured soul.

Even worse was that at that time there was no structure of women's cricket for her to develop in - and she had to give herself to lesser pursuits such as novel writing.  Men could play cricket all day everyday, but not men.  Her feminism was confirmed and she was associated with the Suffragettist 'Nets for Women' campaign.

This identity crisis tortured her everyday life and found rich expression in her literary work - her novel Mrs Dalloway in particular contains many references to cricket, its place in English society and how its enduring values survived the trauma of the First World War.

'Cricket is no mere game,' she writes in Mrs Dalloway.  'Cricket is important.'

VW is clearly a man after FB's heart.

And so it seems appropriate that Wisden is now published by the Bloomsbury Publishing Group, even if it has yet properly to honour Virginia Woolf between its yellow covers.

Scotland's skipper Preston Mommsen seems to have had a good WT20 competition as the disappointment of narrow losses to Afghanistan and Zimbabwe were assuaged by a maiden victory in a World Championship (even if they had to wear shocking pink to do so).

But it is his comments on the challenges facing associate members of the ICC which have rung out loud and clear and attracted wide interest.

Will they have any impact?  FB hopes so, but he is not confident that the sport's governing body will respond.

In the early days of this blog FB had access to the private meetings of the ICC as they decided the format of the 2015 World Cup.  He faithfully reported these proceedings in these postings.

There were suggestions at the time that these were satirical presentations.  Subsequent developments merely confirmed their accuracy.

FB's worldwide communications system has been re-tuned and once again he brings his handful of readers a transcript from the most recent meeting of the ICC as they consider Mommsen's remarks.

He is captain of Scotland.

Scotland - you know, where the golf courses are.

Oh yes - so Mumsnet is captain of Scotland's golf team.

No - their cricket team.

Yes, apparently they've been playing in the WT20.

But it hasn't started yet.

That's his point - he says the associates have qualified only to play each other in yet another qualification event before the top teams come in.

What's wrong with that - everyone has to qualify to play India in the final.

He says we have to rethink the format.

I know, it implies we thought about it in the first place.

But they might beat them and then where would we be?  Anyway, what's all this got to do with us?

He says that we should be trying to grow the global game.