Mrs FB tried to avoid the subject for most of the year.  As the cricket season approached its end, many friends have asked innocently, 'Isn't it your birthday soon?' only to be met with a stare that would do credit to Medusa. Friends have got the message and discreetly changed the subject.

FB is aware of the full facts. Mrs FB's sensitivity on this matter should be understood.  It was a special birthday.  She was 39 again.  And why not?  It seems to have suited her well for a number of years.

But such a special birthday presented challenges to FB's limited imagination. Would another handbag be in order?  FB was sure it might be welcome, but then self interest entered the equation. Mrs FB's world famous handbag collection is rapidly restricting storage space in their modest apartments. Any additions would restrict the space available for the winter storage of FB's cricket kit.

His inamorata may have jibed as FB returned from the final match of the season foot-back-knee-shoulder-sore, 'Surely you won't be needing all that rubbish again.'  But FB knew that for heritage purposes if nothing else, it had to command priority in the remaining storage space.  There was no room for additional handbags.  An alternative had therefore to be found.

Many long nights were spent in research and planning.  The pieces fell into place. Proudly he told his loved one, 'I've got you something special for your birthday - a mystery trip.'  He was unprepared for the look of panic on Mrs FB's face.  'If you think I'm going to see the final matches of the English cricket season, think again.'

Such an enticing project had never crossed FB's mind.  Instead, some weeks later, as Yorkshire put the coup de grace to their splendid season,  the happy couple were on their way to the airport.  Mrs FB was still in the dark, 'You're promising me that there's no cricket involved in this?' she said for the twentieth time that morning as they got in the taxi.

Finally FB came clean and revealed the tickets for a performance of La Boheme at Teatro Alla Scala, Milan. Mrs FB is not one to squeal with delight, but FB is sure she squealed inwardly with delight for, if Mrs FB has a favourite opera it is La Boheme.  FB has a sentimental fondness for it too, despite its lack of cricketing content.

The next night they took their seats in the stalls of the famous opera house and Rudolpho and Mimi began their doomed romance.  'Che gelida manina,' he sings (You're tiny hand is an ice cream.....). She replies, 'Mi chiamano Mimì, il perché non so. Sola, mi fo il pranzo da me stessa.'  (They call me Mimi, I don't know why, I make lunch for myself.)  They sing about looking forward to the coming of spring, not mentioning that the cricket season must be on its way.

Mrs FB had barely time to dry her eyes, when her excitement was taken to a new level in Act 2.  First a cute donkey made its way across the stage.  It was shortly followed by a full size white horse.  Both were only in non singing parts, but were still large as life. An opera with a horse in it.  FB felt the warm glow of Mrs FB's approval.  He felt securely in her good books.  Surely she won't complain so stentoriously when she trips over his cricket kit. 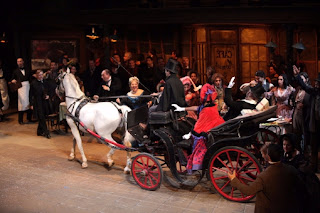 But perhaps the adventure has set Mrs FB planning?  Might she now be looking for a similar tribute to FB?  Is she combing the programmes of the world's leading opera houses to find a production of the Ring Cycle with the Valkyries represented as leg spin bowlers.
Posted by fantasy bob at 21:10 2 comments: 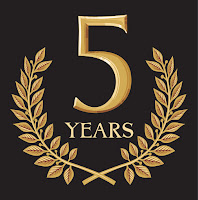 This blog is 5 years young today.

This is significantly above the combined total of runs and wickets that Fantasy Bob has scored over the same period.  It is by some margin below the number of empire biscuits that he has consumed in that time. It is hugely below the number of references to Gustav Mahler included in FB's match reports for the 4th XI of go ahead Edinburgh cricket club Carlton. Gustav Mahler has made no appearances for that team in this - or any other period.

Fantasy Bob apologises to any of the faithful worldwide readers who  may unwisely or inadvertently have read all 1011 up till now deserve something for their pains.  They could justifiably have hoped for a new joke at some point on that journey.

In the life of this blog England have won the Ashes 3 times, Australia once.   By some strange coincidence this is the same outcome as during FB's own first 5 years on the planet (not that he was paying much attention to Ashes series during those years).  It was repeated between 1977 and 1982.

Many great cricketers have passed on in those years - not least Brian Close who sadly died today. Close was an early cricketing hero of FB. It should come as no surprise to his handful of readers that FB modelled his career on Close. Obviously, he was rather hamstrung by the lack of all round cricketing ability.  Nor could he ruthlessly apply tough as nails tactical awareness to deliver results. But he could match his hero in the area of hair loss.


A fifth anniversary is generally held by those who know or care about these things to be the wooden anniversary. A cricket bat is therefore an appropriate anniversary present.
Posted by fantasy bob at 16:50 3 comments: 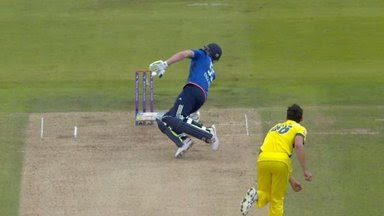 Fantasy Bob has been absorbing the implications of  Ben Stokes'  dismissal for obstructing the field in last Saturday's ODI.

It been suggested many times has  that Fantasy Bob has obstructed the field.  The umpires have always declined such appeals - not least because FB has been a member of the fielding side at the time.

FB's colleagues did not consider this a relevant consideration and lamented these decisions vigorously.  They seemed unconvinced by the qualities of calmness and stability that FB claimed to bring to the fielding side.  'But he was clearly in the way,' appealed the fleet-footed junior whose energetic pursuit of the ball to the boundary had been subject to a significant diversion to circumambulate the remarkably stationary FB.  'Clearly in the way,' beseeched a different enthusiastic junior on another occasion as the even more remarkably stationary FB failed to duck in time as the youngster's howitzer-return rocketed in from the boundary homing in unerringly on middle stump.  Invocations of the spirit of cricket availed them naught.  The umpires were unmoved.  As was FB, who FB remained on the field of play - stationary.

FB has seen collisions between batsmen and fielders occur from time to time which disregard for the spirit of cricket might deem obstructive.  He has seen batsmen diving for the crease, usually following inappropriate calls for a quick single skittling stumps, wicket keeper and slips as they career along the ground wholly out of control.  Not so much obstructing the field as ploughing it.

He has seen senior bowlers, at the end of what passes for their follow through, innocently resting after the overwhelming effort of getting their delivery towards the batter's end, trampled underfoot by that same onrushing batsmen.

These slapstick incidents are enjoyed by all who do not see it appropriate to spoil the collective mirth by appealing for obstruction.

Pundits have expressed concern that the incident will mean that bowlers will forever be throwing the ball at the batsman and appealing for obstruction.  The risk of this in lower league cricket is low.  For  FB has seen many attempt Mitchell Starc's feat of picking the ball up in their follow through and attempting to throw the wicket down.   The result has invariably been 4 byes, or a slipped disc or both.  There has been no need for the batsman to take evasive action* or stretch his arm out to deflect the ball* (*readers should delete according to their nationality).

Lower league bowlers therefore generally resist this temptation.  Regrettably this common sense does not always extend to their lower league wicket keeping colleagues many of whom, even though they stand so far behind the wicket that would make the casual observer suspect that Shoaib Ahktar must be the bowler, attempt a stumping on every ball.  The ball finds itself in their gloves, whether by accident or design, and they immediately fling it at the direction of the stumps regardless of the batsman's actions.  The stumps have to be reset several times an over.   It would try the patience of an Eion Morgan.  Not to mention causing the square leg umpire extreme exhaustion as he is required to trot back and forth.

There is therefore much to reflect on in the Stokes' incident.  One aspect of it struck FB more than any other.  Watching the incident in real time, FB would have said that Stokes was not out.  But watching it in slow motion, he thinks that it is clearly out.  He explained matters to Mrs FB at length over the breakfast  table next morning.

'Just as well we don't have slow motion,' he remarked at the end of his extended exegesis.

'What do you mean?' she replied showing a surprising level of wakefulness. 'Your only motion is slow.'