Little did Fantasy Bob realise last Saturday when he won the toss and inserted the opposition that he and his team mates were about to witness some proper cricket.

The scorecard will only reveal that the opener (names are suppressed to protect family and loved ones) was out caught for 0. Bad luck, readers may think. They may think again when they learn that the dismissal was in the 21st over.

For all present, it was a cleansing experience - the perfect antidote to modern cricket’s soul destroying ILP induced obsession with instant gratification and 3 figure strike rates. For there was nothing instant and certainly no gratification .  So proper was this proper cricket that there was not even a strike rate.

Stonewalling is a dying skill. When FB first played league cricket, victory was only possible for the side bowling second if they took all 10 wickets. Otherwise the match was a draw. And the batsman who could bat for the draw by putting up the shutters was as valued member of the team as the fast bowler and the dashing middle order batsman, only subject to more dressing room ribbing than them. Players would  also know the stonewaller in the opposition and when he strode to the wicket, the fielders in the deep would get out their deck chairs since they knew any prospect of them being called to action that afternoon had disappeared.

Gone are those days – the side bowling second can win even without taking a wicket.  This is not proper cricket.  And the language is impoverished - the terms winning draw and losing draw, redolent with meaning though they may be, have fallen out of use. We are all the poorer.

Low scoring has a time honoured place in the top level game too.  In 1999, New Zealand bowler, Geoff Allott playing S Africa at Auckland, faced 77 balls in 101 minutes before being dismissed for a duck. This is the longest completed innings without scoring in Test cricket. It stood as the longest time at the crease for no runs until March 2013, when Stuart Broad batted for 103 minutes against New Zealand before scoring a run. Broad then accelerated, in his next 35 minutes at the crease he scored 6 – and, like Allott, was dismissed having faced 77 balls.

Both innings were key to securing draws for their sides. Sadly, Test cricket is not sophisticated enough to differentiate between winning and losing draws. All draws are the same.

Junior cricketers in FB's side who have gorged on unnatural run rates therefore failed to understand the nostalgia that ran through FB and his more senior colleagues at witnessing this innings.   What were they on about in these repeated references to proper cricket?  FB and his wrinkled mates may not have called Allot's and Broad's efforts to mind, but there was only one name on their lips when they discussed slow scoring after the match. A proper cricketer in all senses of the word.

The legendary Chris Tavare played 31 Tests for England through the 1980s. His career strike rate was 30.60 ie it took him more than 3 balls to score every run he made.

His feat of two separate scoreless hours in the same innings is unique - against Pakistan at Lord's in 1982 he scored 82 in 406 minutes facing 277 balls.  Even that was brisk compared to the 6 and a half hours it took him to compile 35 in Madras off 240 balls earlier that year.  Later the same year, he managed a scoreless hour in each innings at Perth; in the first innings he scored 89 in 466 minutes from 337 balls, positively racing along compared to the 9 he scored in his 2 hour second innings in which he faced 82 balls.

Yes Tavare was a legend. But he was far from being the slowest scorer ever in fact he is quite far down the list. Mike Brearley was even slower. But heading this list is New Zealand’s Trevor Franklin, who career strike rate was 26.44.  Only once in his 37 Test innings did he score more than a run every 2 balls (50+ SR). But he is on the Lords honours board – his only Test hundred took him him 310 balls and over seven hours, 45 minutes of which was spent on 98. This pause was just showmanship, building up the tension, for when he finally got to three figures the crowd went wild – and then settled to sleep again.

Proper cricket - where has it gone?
Posted by fantasy bob at 15:09 3 comments:

On reflection, Fantasy Bob does acknowledge it was a bit of a half tracker.  And Mrs FB is not one to miss out on those. 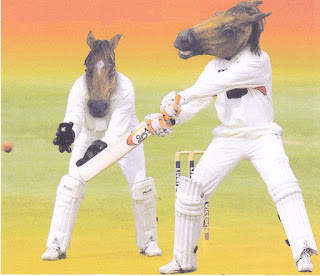 FB has long accepted that he takes second place in Mrs FB's affections. Despite the fact that her equine companion has done little to contribute to her jewelry collection, it retains its supreme position.

So he might have thought a bit harder when he turned the page of his newspaper and found a report of recent research into horsey type behaviour.  But before he could stop himself his unengaged brain had done the damage.

'Horses have a rich repertoire of facial expressions compared to other animals,' he read out to his life partner.

She was on the front foot immediately.

'Of course they do,' she drove through the covers on the up.  'And compared to you in particular.'  The ball slammed into the boundary boards.

For Mrs FB has observed before that FB's unmoving facial expression can make social interaction difficult. 'Nobody knows what you're thinking.'

FB defended himself by saying that he was rarely thinking anything, but this did not convince. He had to venture into further explanation.  'Facial expressions give away to the bowler what you're feeling,' he said.

'Pah,' came the whirlwind pull to midwicket, 'every bowler knows that you feel sheer blind terror at every ball.'

FB did not feel that he had defended himself successfully.  He noted that the article reported that close scrutiny of changes in facial anatomy and muscles pinpointed no less than 17 individual movements in horses, compared to the 13 expressions used by chimps. Humans, other than FB, are capable of 27 such movements.

Apparently horses have a higher rating than their genetic place in the evolutionary tree would suggest, which is taken as evidence of the impacts from social and ecological factors.  FB suspects that were the researchers to investigate Mrs FB's horse they might identify an even higher rating given the extensive social interaction with Mrs FB.

FB has done his fair share of riding and enjoyed it greatly.  But he never found social engagement with his horse particularly satisfying.  Perhaps he was unlucky with the horses he was given, their facial repertoire was limited, they were buttoned up, uncommunicative.  But more significantly he found the horses unable to offer much by way of an opinion on such important matters as how to play leg spin bowling or the iniquities of the ICC's craven approach to associate and affiliate nations.   He rather gave up on attempts at conversation.

Nevertheless, he should acknowledge horses have played an important role in cricket. For it was horses who first pulled the heavy roller, hooves clad in delicate velveteen booties, requiring of early doughty groundsmen skills in animal husbandry which have long since vanished.

Evolutionary traces still remain, however.  Research shows that under such stimuli as junior members running over the square, the repertoire of facial expression employed by the contemporary doughty groundsman exceeds that of normal humans.

Mrs FB has noticed that Fantasy Bob has not been in a good mood recently.

'What's up, mon cherie,' she said as she looked up from carefully dusting her collection of premium handbags.

'After all, it's not as if you forked out a hundred smackers for the Saturday of the Edgbaston Test is it?'

'What's wrong?  You're not still in the dumps because of your last visit to the crease you batted like a muppet for nought and guided a gentle outswinger straight to first slip........?'

FB turned to face the wall.  The memory might still be raw but he had lived through such ineptitude before - many times.

FB merely sighed.  There had been all too much Stuart Broad in recent weeks.

The tears were not far off now.  Slowly, holding back a sob, he pointed.

Mrs FB's gaze followed the trembling finger.  She saw the newspaper and understood the full horror. For there in block headlines was the full story: