Cricketers among the millions, indeed billions, who have rushed to purchase Grand Theft Auto V should prepare themselves for disappointment. 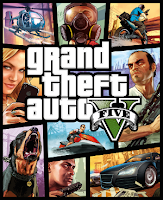 Cricketers might have joined Fantasy Bob in supposing that a computer game based on the careers of characters named Michael, Trevor and Franklyn would have something going for it in terms of cricket interest.  For who else could these characters be but Michael Vaughan, Trevor Bailey and Franklyn Stephenson.  An unlikely trio perhaps, but they could be brought together with a few leaps of the imagination.  The highly developed skills that each would bring - Vaughan's sublime cover drive, Bailey's stonewall defence, and Stephenson's celebrated slower ball could give them an advantage in most tight circumstances.

But FB is sad to relate that the characters bear no resemblance to these real world heroes at all. Michael is a former bank robber in his early forties who lives with his dysfunctional family on the proceeds of his former life. Trevor his former partner lives alone in a trailer in the desert. Franklin makes a living as a repo man for an unscrupulous Armenian car dealership. And cricket is far from their minds as they career around their fictional world in a series of ever more frenetic heists, car chases and shoot outs.

The game is set within the fictional state of San Andreas and the fictional city of Los Santos. Despite the fact that these are said to be based on California and Los Angeles respectively, a fact which probably explains why the characters encounter no cricket matches in progress as they scream along in their souped up cars, FB understands that there are references to Edinburgh's tram project in the detail of the narrative. The developers of the game are based in Leith an area of Edinburgh which suffered significantly from the protracted construction phase of the project. Despite being dug up several times the original intention of running the trams to Leith was abandoned - leaving only fond memories of snarling taxi drivers in the minds of Leithers. And hidden references in best selling computer games.
Fantasy Bob's faithful, if dwindling, worldwide readership will correctly infer that the chances of FB playing Grand Theft Auto V are less than of his successfully defending his wicket against leg spin bowling. That is considerably less than zero.   Such games join the long list of those manifestations of the modern world that FB finds unnecessary - a list which daily grows in length but more recently has been extended by UKIP MEPs, the paintings of Jack Vettriano and above all the IPL.

But if a story involving Vaughan, Stephenson and Bailey was too much to hope for, the reference in the narrative to Edinburgh's trams suggests that all is not lost and had the creators of the game made a little more effort they could have got FB on board.  Had Michael, Trevor or Franklyn at a crucial point in their adventures, instead of blasting everything in front of them with an automatic weapon or executing a series of hand-brake turns, simply sat down for a nice cup of tea and an empire biscuit, FB would have found something to commend.  It would have been a start. It would have given him a bond with the juniors next season.  A lost opportunity.

Cricketers may be averse to the National Galleries of Scotland.  Many of them have been dragged round by well-meaning parents or partners.  Some may just have chanced through its portals looking to escape the weather.  Either way they end up disappointed. For while on the walls they can see lots of Madonnas, lots of wooded hillsides, lots of mountain vistas, even a decrepit Spanish crone frying eggs, cricket does not feature in any of this stuff. 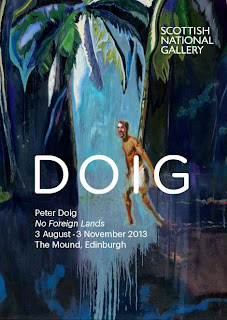 Fantasy Bob has established, through long years of meticulous research,  that this is not a specifically Scottish failing.  Even in the National Gallery in London, situated less than 2 miles from Lords or the Oval, cricket based works are absent.

It is nothing short of a national scandal.

Cricketers might not therefore find themselves filled with enthusiasm at the prospect of the National Galleries of Scotland's present exhibition No Foreign Lands.  They should reconsider.

This exhibition features recent work of Peter Doig, born in Scotland but who has spent his life in London Canada and Trinidad.  The paintings on display are drawn from his work since 2000 when he returned to Trinidad.  It is a fine body of work with the heat and steam of the sub tropical environment well depicted in a series of original and arresting compositions.  (FB apologises if he begins to sound like an art critic at this point.  He will put the absinthe aside).

But as they move through the rooms cricketers will suddenly come face to face with 2 mighty canvases depicting a cricket scene.  They may rub their eyes in disbelief.  Cricket in the NGS?  They may pinch themselves.  Are they dreaming?  Have they died an woken in a gallery in Heaven?

But no.  It is so.  There before them are the real thing.  2 huge paintings capturing different moods of the same scene.  A bowler in his follow through; a batter about to step into his stroke; a wicket keeper standing almost transparent in the middle distance.  Astounding work.
The cricketer will wish to dwell on these paintings for some time.   The artist captures real bits of action.  The curve of the bowler's hand having released the ball.  The batsman's left foot lifting in sympathy with his back lift. The coaching manual could not present it better.

Doughty Groundsmen however may linger even longer.  As a breed Doughty Groundsmen are prone to critical observation and they may loudly wonder what kind of preparation went into the presentation of a wicket that appears completely orange.  They should take care not to disturb other cricketers viewing the work.  Instead of muttering audibly, they may consider writing to the artist to enquire as to his visual acuity. They may invite him to inspect their own wicket and monitor their careful presentation of it to see for himself the true place in the colour spectrum that is held by a cricket wicket.

Doig says he made these works after playing beach cricket in Trinidad.  He may therefore have captured some future Test stars in his painting.

For the list of West Indies greats who started playing such games in Trinidad is long and prestigious.  Here is a Trinidad XI (not in batting order)

A team fit for any oil painting, orange wicket or not.

Today is Mrs FB's birthday. A day she shares with Richard the Lionheart, Antonin Dvorak, and Geoff Miller.

Geoff Miller played 34 Tests for England before becoming a selector. Otherwise, Mrs FB is probably the best cricketer among the lot of these birthday boys. And even Geoff Miller might have difficulty dealing with Mrs FB's overspun underarm lob. Particularly when it comes at him from behind the drying washing.

There is of course a mystery about Mrs FB's age. Mrs FB properly takes her cue from Oscar Wilde's Lady Bracknell who said, '35 is a very attractive age. London society is full of women of the very highest birth who have, of their own free choice, remained 35 for years.'

Like those women of Lady Bracknell's acquaintance, Mrs FB, though not in London society, has been 35 for years. The remarkable thing is that Mrs FB's elder sister and many of her girlfriends have also been 35 for years.

FB has on occasion tried this approach with his batting.  To start one's innings on zero is so commonplace. It is positively dull.

FB will therefore face his first ball confident that his score, his freely chosen score, lies on 60.  For 60 is such an attractive score.   It is near enough 100 to be interesting but indicates that some further application is required.  It is the kind of score of which Lady Bracknell might approve.  FB is sure London society is full of batsmen who have been on 60 for years.

FB will take his guard.  He will scan round the field acknowledging the recognition in the fielding side of a batsman on 60. A batsman in his prime. He will take his stance, look up and see the bowler begin his run.

There is no memory of what happens next.  For when his eyes open he is on his way to the pavilion. 'To lose one stump may be regarded as a misfortune, to lose two looks like carelessness,' as Lady Bracknell might have remarked.

But when FB closes his eyes again, he is still on 60.  He always will be.

At the end of the season, the statistics obsessive that is inside every cricketer blossoms.  For what other way is there of understanding the success of the season than by close and careful scrutiny of what the score books reveal.

The memory of the warm June sun on his face; the lingering feel of that cover drive in July which whispered off the bat but slammed into the fence; the recall of that booming in swinger that took the top of middle stump are all very well.  But it is the numbers which tell the truth.  So here are the numbers which define Fantasy Bob's season.

Number of runs scored off middle of bat -2

Number of runs scored off edges -196

Number of stonewall LBW appeals turned down for incomprehensible reasons - 57

Number of 3s run - a number seeming to approach infinity

Number of pieces of kit lost or otherwise requiring replacement - 0

Number of junior members left behind at away fixtures - 0

Number of times FB thought on the trudge back to the pavilion having missed a straight one 'Sod this for a game of soldiers - this is the last season.' - NONE

All in all a most successful and enjoyable season. Many thanks to all team mates and opponents for putting up with FB.  The bad news for you all is that he is already looking forward to next year.  He thinks that there is another season in him.  Such is the power of empire biscuits.