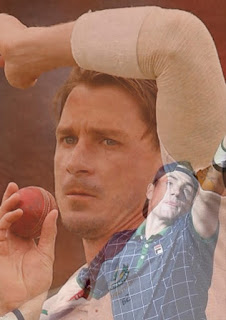 Amongst all the fake news, the jeremiads and hagiographies of worthless footballers, there was an item in the newspapers this week which stimulated Fantasy Bob's interest more than usual. In the Guardian's excellent Notes and Queries section there was posed the question,

As FB perused the answers offered by fellow readers, his brain began to race - if not to 150mph then pretty near 15mph.  Why is not exactly clear - for FB's chances of seeing either delivery would be zero.

It reminded him of a tale he heard a long time ago - he has no idea as to whether it is apocryphal or not.  So in the contemporary spirit of fake news he retells it here.

Middlesex CC were playing against a local club side in some charity match. Their full squad was there including West Indian quickie Wayne Daniel.  An opposing tail ender came into bat.  Carefully took his guard, scanned the filed and prepared to face the demon.  The keeper and slip cordon crouched in readiness.  Daniel turned at the end of his long run and steamed in, arms pumping, nostrils flaring.  A huge leap and his arm came over.  The batsman fended.  There was a huge appeal as the keeper threw the ball skyward. Shaking his head the batsman slowly departed.  It was not until he neared the boundary that he was called back to be told with much mirth and good humour that he'd been conned - the ball had been with the keeper all the time.  It was too easy to believe that the ball was so fast that it could not be seen.

FB is sure that he has been victim to this rouse a number of times, only the perpetrators have not confessed to their deception.

But to return to the question put.  A respondent noted that a tennis ball slows down significantly faster than a cricket ball (something to do with mass) - added to which the distance between the server and returner is significantly greater than between bowler and batter.  That did it for FB - it was conclusive - he still wouldn't see either.

But he noted with interest the fact that the ball slows as it approaches the batter.  This is not FB's experience at the crease.  Invariably the ball speeds up as it approaches him - and in the case of 11 year old leg spinners the increase in speed is exponential. There is only explanation - a special zone of magnetic attraction around FB where the laws of physics are reversed.  So here is a question for the clever clog readers of the Guardian - Is FB a black hole?
Posted by fantasy bob at 09:14 No comments:

Fantasy Bob feathered the ball.  Perhaps the faintest edge in the history of cricket. But the wicket keeper safely gobbled it up and FB was on his way.   But he was almost flattened by the keeper who having pouched the ball, extended his arm in front of him and ran directly to the bowler yelling with an inchoate scream.  His team mates joined in the cacophony, jumping up and down in a demonstration of pogo-ing not seen since the high days of punk rock (if there were any).  The excitement continued until FB had trudged safely beyond the boundary.  FB had totally dominated the bowling to score a majestic 2, expertly using both the edges of his bat to avoid wearing out the valuable middle.

Even acknowledging the value of FB's wicket, this celebration seemed disproportionate.  More correctly , even acknowledging the complete lack of value in FB's wicket, this celebration seemed particularly disproportionate.
FB has more or less resigned himself to the necessity of sharing high fives with his junior team mates on the rare occasion he takes a wicket.  He may even have ventured a fist bump - and woken in terror in the middle of the night as the horror of the memory sinks in.  But to run around screaming like a deranged whirling dervish, hugging everyone in sight, seems, well, not to put too fine a point on it, just not cricket.

And yet this form of celebration is increasingly pervasive in the lower leagues that FB inhabits. Passing dogs run in terror at the high pitched screaming.  Gibbons in the zoo reach a fervour of excitement at what seem to them endless mating calls drifting on the wind in their direction.  FB is reduced yet again to wondering where the world found this handcart in which it is fast descending.

It is against this backdrop that FB presents the photograph below which was taken in the same match in which FB suffered the indignity of being whooped and hollered all the way to boundary.  He commends it to the appropriate authorities for inclusion in forthcoming coaching manuals.

FB has just taken a catch off his young bowler.  (For the benefit of readers who may be uncertain on this point, FB is on the left and his young bowler on the right). There is no whooping, no dervish dance. Just a nod of the head and a manly handshake.  Proper cricket.