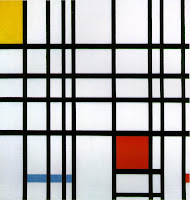 This is Composition with Red Yellow and Blue by Dutch artist Piet Mondrian, one of the most celebrated artists of the 20th Century.  Mondrian developed his highly distinctive grid based style in the early 1920s.  His early work had been landscaped based but he gradually developed this defiantly abstract approach through contact with Cubism and other modern movements in Paris either side of the First World War.  He continued to paint in this style until his death in 1944 at the age of 72.  His works had more lines, or fewer lines or more or fewer squares of primary colour.  But they were all distinctively Mondrian.

What was this man trying to say, Fantasy Bob has been wondering.  What is the emotional charge that underlies these apparently emotionless works?

Fantasy Bob's studies suggest that Mondrian is a tragic figure.  His work shows his hopeless pursuit of an idea.  It is sad beyond measure that Mondrian never quite attained the perfection he was looking for.  He got off on the wrong track by making his lines black - white is a better bet - and by using only the primary colours.  Had he corrected these faults he would have created many more perfect masterpieces like the one below.