Another quirk in atmospheric conditions has meant that Fantasy Bob has been able to listen in to the report back from ICC's representative at the recent Cricket World Cup Qualifiers.

- Gentlemen, I can report that this tournament was a great success.
- Hooray.  [Clinking of glasses]
-The ICC can take great credit.
- Hooray. [More clinking of glasses]
- Our 10 team World Cup is a triumph.  There will be no Associate nation.
[Popping of champagne corks - a song is heard - 9 games for India]
- We can look forward to a golden period of growing the game.  The 8 team World Cup is in our grasp.
- And then a 6 team..
- ...4 teams.......2 teams!!!!
[More champagne corks pop - another song is heard - 12 games for India]
- But I have heard that the Associates are not happy.
- Nonsense - who is saying that?
- Someone called Kylie Minogue.
- Not Minogue - Coetzer.  Kylie Coetzer - he's captain of Scotland.
- Captain of Scotland at what?
- Cricket.
- I didn't know they played cricket in Scotland.
- They almost qualified.
- Surely not.  Who allowed that to happen?
- Yes, it took some exceptional umpiring to keep them out.
- And the rain.
- Well, I suppose Scottish people are not used to that.
- What more do they want?
- More matches.
- Are they mad?
- They say that is the only way that they will become more competitive.
- What?  If they become more competitive....
- .....they'd get in our World Cup.......
- ......and there'd be less money for India.
- ......which would stop us growing the game.
- THEY ARE MAD.

Earlier this week a quirk in the atmospherics meant that Fantasy Bob overheard what appears to be an editorial conference at a major Scottish media outlet.

- Right we need a big splash on the back page - sports editor what do you have for us?
- Eh - nothin' - Rangers and Celtic weren't playing.
- Nothing?  There must be something.
- Zippo - Rangers or Celtic huvnae signed nae unknown forriners this week.
- I thought one of their players got a new haircut.
- Naw that wis last week.  We're in a tragic news drought.
- There must be other sports.
- You dinnae wint us to cover the Hibs do ye?
- Other sports, not other teams.
- We done that - we done an article aboot golf last year.
- I remember that - a Rangers player got a hole in one.
[Silence]
- What about cricket?
- Whit's that?
- Aren't Scotland playing qualifiers for the world cup just now?
- Are they?  How would I ken?  I'm the sports editor.
- They beat Afghanistan.
- Nae a great fitba nation.
- They're unbeaten so far.
- See whit happens when you appoint big Alex McLeish.
- Nothing to do with McLeish.  We need to give the cricket some coverage.
- OK OK.  How mony Rangers players is involved?
- None.
- OK  Must be a' Celtic players then?
- No.
- Oh no, it's nae Aiberdeen players is it.  I'm no going up there for interviews.
- No - it's cricket - it's nothing to do with football.
- Cannae go on the sports pages then.  This is a Scottish paper. 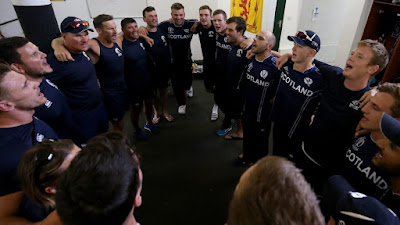 As the Beast from the East recedes the full horror of the life or death struggle is becoming clearer.

Many faced extended periods of empire biscuit deprivation as panic buying stripped the shelves of all provender.  In many parts of Scotland shoppers disaster loomed found only fresh fruit and vegetables.

Even Fantasy Bob could not resist the hysteria of panic buying - as a result, he now has 6 new cricket bats.

Mrs FB did not seem overly impressed as he returned from the blizzard blasted wasteland proudly bearing these trophies, although she did eventually concede that, used with dexterity and a sense of purpose, they might be used to move the snow from the path to the front door.  FB felt that her trenchantly expressed scepticism that FB had any dexterity, far less a sense of purpose, did little to help the household's overall response to the extreme conditions.  But he bit his tongue.  Thus adding injury to insult.

Much as the media tried to downplay the horror by continuous hysterical reporting of references to red alerts, extreme conditions and life or death situations, the sense of panic was not eased.  Emergency services were inundated with calls.  Police Scotland report that they received 50% more 999 calls than usual.

FB is sure that there were many in genuine difficulty but, as increasingly seems to be the case these days, there were many calls which suggests that many of FB's fellow citizens understand that the word emergency now means a situation of mild inconvenience.  Police therefore had to respond to such life or death matters as a desperate request to borrow a show shovel;  a frantic concern that a gate was frozen; an imperious command that since there was no bread in the shop and could the police make a delivery; a sobbing inquiry as to where an open cigarette shop could be found.

These calls only add to the long history of similar 999 calls - distraught citizens have called to report that eggs in the fridge were broken, that their kebab is cold and that they have forgotten their password.

FB has never called 999.  Obviously he has been oblivious to threat.  He needs to reassess his generally stoical outlook.  He needs to revise his sense of emergency. He regularly faces life or death situations.

The next time he sees the ball being handed to an 11 year old leg spinner. He knows what to do.  999.