A quirk in the atmospheric conditions meant that Fantasy Bob’s attempts to listen to Radio 3's fascinating discussion on Gustav Mahler's bowling action were interrupted by a relay of what appear to be proceedings from the board room of the ECB discussing the First Test Match between England and Pakistan. 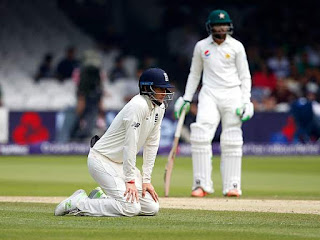 Well, that was a great victory.

Eh? What do you mean? We were stuffed.

Precisely - it's victory for our strategy.

Indeed – and we are making good progress. I mean who would want to watch it after that performance?

It’s outrageous – this fellow Root for example – he had more than 100 balls all to himself.

Who is he anyway?

Didn’t I read in a newspaper that he’s captain.

Captain?  He should be showing some leadership then. 120 balls all to himself.  It's shocking.

Never get that chap Morgan doing that – he gets the strategy – he normally does with just 3 or 4 balls.

We need to think what do do next – there’s another of these Test Match things this week.

Good God – what had we been drinking?

I think we thought it would be a good way to run down our stock of red balls.

How many do we have left?

Too many. We’ve had to ask the Irish to help us get rid of them.

Ah yes – good wheeze. Can’t we give some to the Jocks too?

No, the ICC rules are clear that the Jockos get nothing.

They get duff LBW decisions.

Obviously.  But nothing else.

That's a bit harsh - who voted for that?

We do need to think about the County Championship.

Why – nobody else does.

It takes days and days.

Crazy - these are days when we could have more 100 ball matches.

Can’t we move it to February?

Brilliant! That'll get a whole new audience who know nothing about cricket.

It was one of Mrs FB's more challenging asides. Some years ago she was escorting Fantasy Bob through a celebrated temple of modern art.

'Minimalism,' she said, as they entered a gallery devoted to practitioners of that style, 'it's always seemed to me to have a lot in common with your batting.'

'What,' replied FB, 'in its elegant economy of movement and gesture?'

'No,' came the reply. 'In its minimal number of runs.'


FB found himself recalling this deeply repressed exchange recently as he watched Simon Schama complete the excellent Civilisations series on BBC. The programme examined a number of contemporary artists who he thought he had relevance to an age where the very concept of civilisation itself seems under attack from the snake oil salesmen of T20 and 100 ball cricket formats.

One artist featured was Walter De Maria, who is described amongst other things as a minimalist. In 1960 he called for meaningless work: art that does not accomplish a conventional purpose. Was it this that gave his work a peculiar significance to FB whose very existence - particularly on the cricket field - can only be described as meaningless and without a conventional purpose?

Perhaps, but more probably it is the fact that in spite of being American, De Maria is one of the great cricket artists. See his great work below.


In 3-5-7 there are 24 sets of stumps in 3 lines obviously expressing something very deep.

Stumps obviously did it for De Maria for in his later work time timeless no time, they adorn every wall of the gallery and express something even deeper.

But he had more in his kit bag than stumps. In Dem - broken kilometre, he expresses that existential nightmare known to every cricketer - indoor nets.