Fantasy Bob joins the rest of the cricketing world in wishing the now former Scotland skipper Preston Mommsen every success in his new career following his retirement from international cricket. 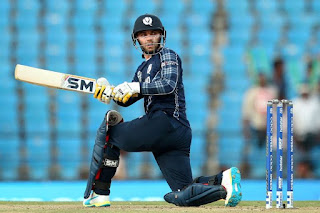 Preston has led the Scottish cause with distinction and success for the last couple of years. His recognition as Associate Cricketer of the Year 2014 was a towering achievement. His tussle earlier this year with powers that be in the ICC and their shameful ignoring of associate cricket made him the stuff of legend. (FB modestly suggests his own account of this incident on this link remains definitive.)

Only he can know the level of challenge that this role presented. FB is fairly sure that whatever stresses and difficulties there were in leading Scotland in the CWC and the World T20 Cup, they pale into insignificance compared to the challenge he faced previously when a member of go ahead Edinburgh cricket club Carlton. For it was there that he unwittingly assumed the task of improving FB’s non-existent batting prowess. As the unfortunate few who have misguidedly followed these witterings over the years will know, this is a challenge that over the years has defeated the cream of Carlton’s coaching elite.

Undaunted Preston accepted the challenge. At the next club night, he lobbed a few gentle throw downs and keenly watched his new charge’s less than balletic attempts to put bat on ball.

His histrionics over, FB looked up expectantly, waiting for the magic hint, the secret to correct that small flaw in his technique that would unlock a succession of quick fire half centuries.

He tried to jolly his stern faced new coach along, ‘That felt pretty good.... I hit at least one of those.... just about.’ Preston nodded in that inscrutable master batsman way. FB engaged again, ‘Well, maybe my stance is a bit too open.’

While FB never looked back (even with more than one eye open), and now watches the ball all the way down the wicket until he misses it, the grit that entered Preston's soul during these challenging served him well as he continued to grace the international stage and call out the closed eyes in the game's governing body.