There is little doubt that Henri Matisse, 1869-1954, was one of the greatest painters of the 20th Century. He is particularly known for his use of bright colour and his fluid and his expressive and original draughtsmanship.

Fantasy Bob would like to make clear that Matisse is an artist that  greatly admires. He trusts Matisse returns his respect for FB.  However admirer though he may be, FB has to acknowledge that Matisse's attempts at cricket painting were frankly disappointing - indeed they might be more accurately described as rubbish.
This is Matisse's Bowlers - which dates from 1908 and which, as far as FB can see, does not look like any bowling he has seen, even allowing for some artistic licence.  It may be that the chap on the left has been giving the ball a good polish but that's about all that seems likely.  No wonder then that this work is hidden away in the Hermitage Museum in St Petersburg, where viewers are unlikely to be dominated by cricketers.  Even FB could do better. 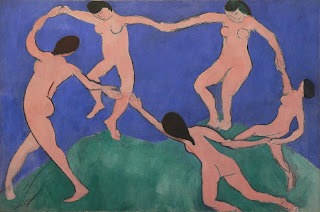 Even worse is La Danse, which Matisse painted in 1909. Do not be fooled by the subterfuge of the title.  FB understands that the artist tried here to depict the fielders in the ring during the bowling powerplay - obviously a very difficult subject since the powerplay was not invented for another 90 years.  This painting is in the National Gallery in London where many cricketers might see it.  To avert public disturbance, the authorities agreed to change the title from the original - Opening Over: Middlesex v Surrey.  Matisse knew he failed because he tried to repaint it a year after. If anything the second version was even less like the real thing, and like his earlier Bowlers has had to be hidden in the Hermitage.

Wisely after these hopeless efforts, Matisse gave up hope of becoming the great cricket painter that he had previously believed to be his destiny in favour of colourful and increasingly abstract work. In doing so he created many of the lasting images of the 20th Century.