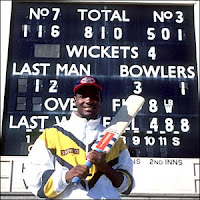 Among its many enduring qualities Lara's world record stands as a continuing subliminal endorsement of Levi Strauss's 501 jeans, the definitive blue jean and a product FB would also willingly have endorsed had he been asked.  He has worn 501s for many years.

Levi work pants (as the Americans would describe them originally) were first made in 1870 when the rivetting of the pockets and other stress points was patented. The original design also had a rivet at the bottom of the fly but this was abandoned, so the story goes, when a company director stood too near a fire and the rivet's heat conducting properties made his eyes water.   The 501s first came on the market in the 1890s and in the 70's and 80's went on to become the world's best selling item of clothing.

An original feature of the jeans is that they are shrink to fit - you are meant to buy them big and they reduce to your slim hip dimensions when they wash.  Early advertisements suggested that you should go into the bath with them on to make sure that they shrunk to your shape.  FB was devoted but he never went that far.  Since the 1980s Levis have been noted for a series of iconic advertisements featuring significant songs eg I heard it Thru the Grapevine, Stand By Me and so on.  But their promotion wasn't always so slick.  FB recalls a radio ad from Radio Luxemburg many years ago in which a vocal challenge is made to the sheriff - 'Come on Earp, will ya go for yer guns'.  'Nope'.  After several repetitions, Earp is asked why he won't go for his guns 'Cos I ain't got my Levis on,'  came the answer and sales rocketed.

Levis have never made cricket equipment of clothing, more's the pity.  But FB remembers turning out for his Oxford College in a pair of white levi jeans when funds were too limited to invest in replacement cricket trousers.  FB in white jeans - now there's an image that you don't want to think too hard about.