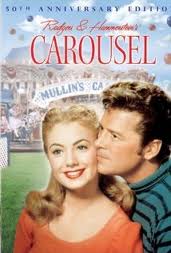 Fantasy Bob's tune to celebrate the arrival of June is Rodgers and Hammerstein's June is Bustin' Out All Over.  This is one of the big chorus and production numbers in the show Carousel.

The show derives from a Hungarian play but the action is relocated to the Maine coast. The story involves carousel barker Billy Bigelow, whose romance with millworker Julie Jordan comes at the price of both their jobs. He attempts a robbery to provide for Julie and their unborn child; it goes wrong and he dies but is given a chance for redemption by returning to support his daughter. A classic redemption tale.  Among the other big numbers from the show are If I Loved You and You'll Never Walk Alone.

Carousel was a hit on Broadway in 1945 running for 890 performances and came to London in 1950.  The show is in revival and is currently touring the UK.  In 1999 Time Magazine named it as the best musical of the 20th Century.  While FB is not sure he would agree with that judgement, he is a sucker for Rodgers and Hammerstein - literate, well crafted shows, immensely tuneful, sentimental and unceasingly optimistic.  They are full of great numbers.  It is disappointing they never found cricket as a subject - and the great cricket musical has yet to be written.

The movie of Carousel was released in 1956, directed by Henry King and starring Gordon MacRae and Shirley Jones. It was therefore in the cinemas during Laker's summer.  In the Ashes series Jim Laker took 46 wickets at 9.60 - this remains the record haul in a 5 Test series.  In the Fourth Test at Old Trafford he took 19 wickets including all 10 in the second innings - 9-37 and 10-53. England won the series 2-1.  He was the first bowler to take all 10 wickets in a Test innings and only Anil Kumble has since matched the feat.  Remarkably Laker had taken all 10 in Surrey's match against the Australians earlier in the season.

FB was too young to have seen Laker play but he remembers with great affection his commentary of many Sunday League matches with his distinctive voice with no gs ever voiced as in 'Pillin' is playin' a match winnin' innin's'.................and June is Bustin' Out All Over.............