Who gives a toss? 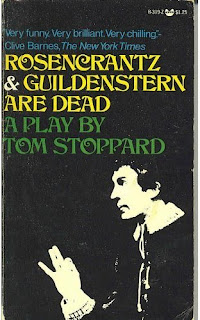 If Fantasy Bob recalls correctly, Tom Stoppard's great play Rosencrantz and Guildenstern are Dead opens with the 2 main protagonists on the stage. They are tossing a coin and announce each result. Heads.....Heads...... Heads......Heads........Heads..................a long, long succession of heads is announced until there is a pause, one actor looks up and says 'There is an art to creating suspense.' Test Match Quality.
This is the situation facing a captain at the start of every cricket match. It is the same from the sublime heights of the lower leagues to the depths of Test cricket. The toss. It is an event completely independent of the previous event, but captains, teams, observers, commentators all see these events in sequence and the previous event must have some influence on the next one. So what does a skipper do if he has a sequence of losing tosses? Has he called heads too often? Should he change? Exactly when should he make up his mind what to call - before the coin is spun - as it goes up - as it comes down? How dependent on wind conditions is the outcome? If you have to spin the coin how high to you toss it?  Should it be heads up or tails up? These are things that it is hard to coach. In FB's 2 tosses this season, heads have come up both times, which means that the next one must be....................er what?  The Monte Carlo fallacy is hard to resist.

Tradition has it that winning the toss is important and the subsequent decision also. All skippers have in the back of their minds WG Grace's advice that on winning the toss, you bat first, if in doubt, think about it and bat. But does the toss matter? And what of the decision?
Primarily a bowler for most of his career, FB has never quite taken Grace's advice to heart and unless presented with an absolute belter of a track (rare in lower leagues although artificials confuse thinking), usually preferred to bowl first - he could get his own work done, have a decent tea and relax while his batters did their stuff. This wasn't just selfish - as a bowling side, FB's team generally took more league points out of bowling first. Many years after these halcyon days, FB's instincts are still on the bowling first side.
But does the toss matter and does the decision matter? There being no analysis of lower league cricket, FB is forced to turn to some data on Test matches for instruction. Before 1945 there seemed to be a distinct advantage in winning the toss - with a 57:43 ratio of victory in favour of toss winning captains. More recently however that ratio has narrowed to 50:50, and this is an improvement on the 1990s when teams winning the toss actually lost more matches than they won (46% to 54%).
The data is similarly confusing on the choice to bat or bowl. Between 2000 and 2009, teams choosing to bat won 85 and lost 95 Tests, while teams sending the opponents in won 49 and lost 40 Tests (anorak wearers should note that this analysis excludes Bangladesh). So is there any advantage in batting first?
There are factors at play here - covered wickets and the more aggressive batting of recent times have changed the fine balance of the game. Successful 4th innings chases are getting higher. First day batting collapses are regular. Another headache for a captain batting first can arise with the follow-on. Enforcing the follow-on can stretch bowling resources to breaking point, and resulting injuries can affect performances in subsequent Tests. Since 1994, teams enforcing the follow-on have done no better than those not enforcing it. It is not surprising that not enforcing the follow-on, once rare, has become more popular in recent years. In 17 of the last 41 follow-on situations, over 40%, it was not enforced.
There is a similarly confusing picture in ODI. FB found this analysis of the top 5 nations:
What does it tell us? England and India are good chasers. Australia win from any position. But there is little guidance for the confused skipper.
Overall all this blizzard of information and analysis may do nothing than confuse.  But it may well suggest that captains winning the toss should, more often than not, choose to bowl. That is, FB is a better source of advice than WG Grace. The trend seems to be in FB's favour.
But let's look at it from another angle. MS Dhoni gets big licks as the best skipper in world cricket. But in 25 Tests to the end of 2010 he lost the toss on 18 occasions, but won 13 matches and drew 9. In 88 ODI he lost the toss 46 times but won 50 matches.
He therefore loses more tosses than he wins but whatever he does he bowls and bats the pants of the opposition. This is FB's new role model. FB's new strategy is to be like Dhoni and lose the toss. There is of course no more than a 50/50 chance of that happening. Or is there?
Posted by fantasy bob at 08:00