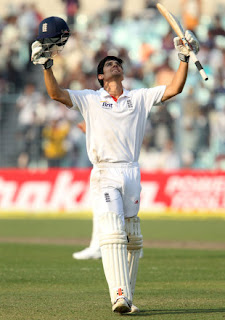 There is universal eulogising of Alistair Cook.  Quite rightly.  His achievement of scoring centuries on each of his first five Tests as captain is unique and he deserves all the accolades for becoming the leading English century maker and the youngest player to 7000 Test runs.   There is lots of natural talent and lots of hard work in this achievement. On current form he is an even money bet to catch up with Tendulkar's record numbers of centuries.

Papers and websites are full of analyses of Cook's impressive statistics.  But what is of interest to Fantasy Bob are Cook's scores in this series. The manner of his dismissal at Kolkata when he lifted his bat from the crease to allow himself to be run out suggests to FB that he wanted to get out on his score at the time 190.  What could he be signalling?

To reach a view on this his other scores in this series have to be considered.

Even FB can see they form no sequence  - although it is worth noting that 190 - 176 is 14 which is the inverse of 41 and that the sum of the digits in his other scores equals 14.  This should tell us something.

But after extensive research here are the factors that are driving Cook's batting.  FB will leave it to his world wide readership to determine whether a higher force is influencing these events.

41 - the number of the last symphony by Mozart also known as the Jupiter.  Jupiter was the Roman king of the Gods - a leadership position equivalent to captain of England

176 - a happy number and abundant number and a cake number this may be one only for number theorists. but at 176 on Rolling Stone's all time top 500 is Don't Worry Baby by the Beach Boys.  A fine track and obviously Cook's message to his team and to all anxious England supporters.

122 - While FB at first thought this might be a reference to the fact that Hadrian's Wall was first constructed in 122AD and that Cook might be making some comment on the campaign for Scottish independence, he thinks that is unconvincing.  it is more likely that Cook is making a comment on the completeness of his being - for in some Tantric philosophy there are claimed to be 122 minor chakras in the human body.  A chakra is a source of energy.

18 - The Hebrew word for life is chai which has a numerical value of 18 giving rise tot eh Jewish custom of .giving monetary gifts in multiples of 18 as an expression of blessing for long life.  18 is also the only number that equals twice the sum of its digits

190 - is another happy number.  But Cook is clearly making reference to the catalogue of the works of Johan Sebastian Bach in which BWV 190 is a cantata.  The full score has been lost, but it sets the text 'Sing a new song to the Lord' (Psalm 96).  Obviously Cook's undemonstrative way of drawing attention to his achievement in becoming the highest English century maker.  This link will take you to the reconstructed cantata.

To a lesser player all this stuff would be a distraction to effective batting.  It is a measure of Cook's quality that he can take all this in his stride and still step down the wicket to smack Ojha back over his head for 6. And all without sweating.  Some player.
Posted by fantasy bob at 08:00