Elvis Has Left The Building

8 January 2015 is Elvis Presley's 80th birthday.  Except that he died in 1977. Tragic.  But even more tragic is that he died without ever having played cricket.

Who knows?  Had he survived he might have come in contact with the game and grown to love it.

Regrettably Elvis's opportunities to familiarise himself with cricket were limited.

As Fantasy Bob is sure his worldwide readership will know, Elvis only once set foot on British soil. In 1960 he spent an hour at Prestwick Airport en route to the US from Germany at the end of his military service.  There is a special star in the terminal to mark this great event.

It seems a typical military blunder that this was in March, so giving Elvis no chance of visiting the adjacent Prestwick Cricket Club.

Instead he had to hang around the terminal building drinking coffee, listening to the clamour of his screaming fans outside and and talking to the press. Had he come in June, he could have popped across to the club for a net.

Who knows how frustrated he must have felt?  All Shook Up at least.

Prestwick and Elvis - it could have been something. For Prestwick Cricket Club had West Indian George Reifer as their professional in the 1990s. George had a twin brother, also a cricketer who played briefly for Hampshire. He died in 2011. His name was Elvis Reifer. He is only Elvis in Wisden.

Elvis may well have left the building - but he still has his impact on cricket.  For no Test Match is complete nowadays without the statutory quota of Elvis impersonators. 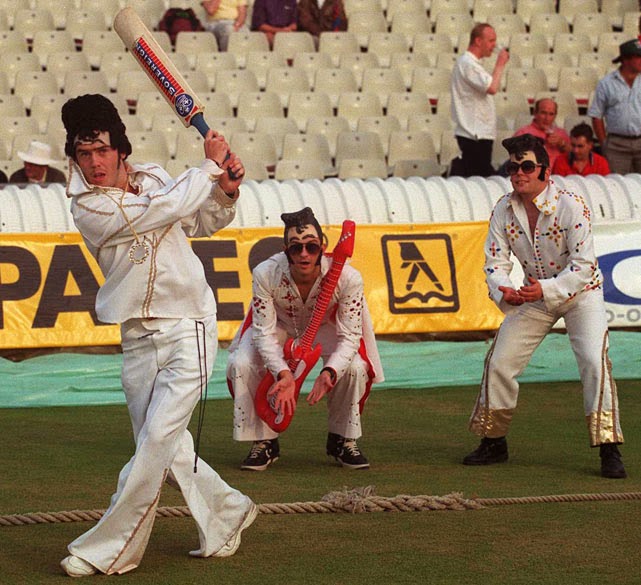